Bring a group to the Fusilier Museum London

Local Stories: the Tower in Wartime 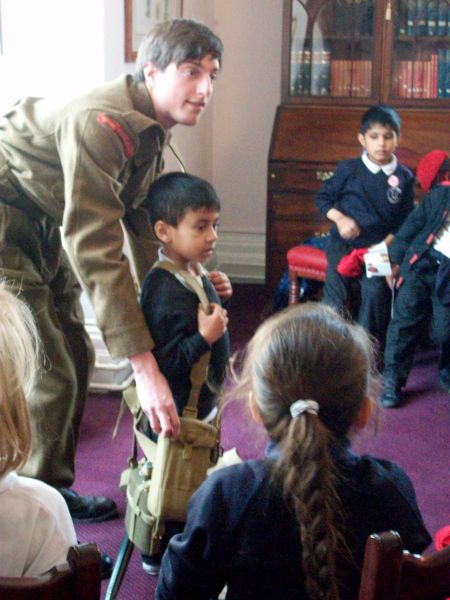 Palace: Tower of London
Duration: 1hr
Theme: Second World War, oral history
KS: KS2
It’s 1940, and the world is at war for the second time. Tommy Smith, a member of the Royal Fusiliers, is preparing for deployment and reflecting on his father’s experiences as a soldier in the First World War.
This session uses storytelling, role play and object handling to bring the past to life. It explores the concept of remembrance and the ways in which the past influences the present. It was jointly created by the Tower of London and the Fusilier Museum London.

Learning objectives
Children will:
- Use objects as evidence to learn about the experience of soldiers during the First and Second  World Wars
- Understand the impact of war on individuals and their local area
- Develop their skills of historical enquiry by questioning a costumed character

National Curriculum links:
This session supports:
History
- Significant events beyond living memory
- A post 1066 study of relevant local history
English
- Maintain attention and participate
If you are interested in bringing a group or want to find out more, please contact HRP's Education Department on:
Email: towereducation@hrp.org.uk
Tel: 0203 166 6654
Or to book a session online click here for HRP's booking site.