'Fusiliers, our brigade is to have the honour to be the first to land to cover the disembarkation of the rest of the division. Our task will be no easy one. Let us carry it through in a way worthy of the traditions of the distinguished regiments of which the Fusilier Brigade is composed…’ 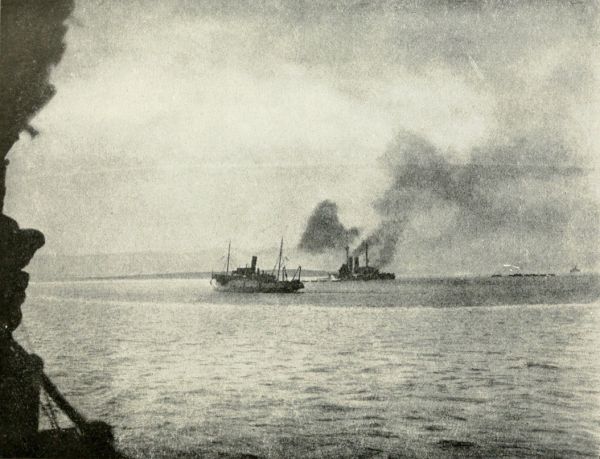 The Gallipoli campaign is remembered as one of the most famous Allied invasions of the First World War. Taking place between 17 February 1915 and 9 January 1916, it was a spectacular attempt to weaken the Ottoman Empire, a member of the Central Powers. It began with an attack on Ottoman forts at the entrance of the Dardanelles in February. This was followed up with an amphibious landing in April on the Gallipoli peninsula with the eventual aim of capturing Constantinople (present-day Istanbul). In doing so, it would provide a supply route to Russia, who were British and French allies.

Unfortunately, it was also a failed attempt and subsequently abandoned. The attack on the Dardanelles failed and it alerted the Ottomans to further potential actions along the coast. Their instincts were correct, and they were fully armed and prepared – to the surprise of Allied troops – when the Gallipoli landings finally occurred. By the time the campaign was abandoned, there were approximately 250,000 casualties on each side.

Although unsuccessful, the Gallipoli campaign secured a place in modern history for developing a new kind of warfare, one in which troops had to make a coastal landing whilst being barraged with enemy fire. Many naval vessels were deployed to carry troops to the Dardanelles and provide support during landings. One of these was the Formidable-class battleship HMS Implacable, who towed boats containing the 2nd Battalion of Royal Fusiliers (86th Brigade, 29th Division) to ‘X Beach’ on 25 April 1915, one of five landing beaches on Cape Helles assigned to British troops. At the time she was commanded by Captain Hughes Campbell Lockyer (1866-1941).

The disembarkation from Implacable on to the transport boats is said to have taken place between 04:00 and 04:45, finally setting off at 05:15. The 2nd Battalion were the first wave to land on ‘X Beach’ to cover the landing of the rest of the 29th Division. Thankfully, their attack proved to be less problematic than their comrades elsewhere. According to war diaries belonging to members of the 2nd Battalion, ‘[t]he Implacable covered our landing with every available gun & except for distant rifle fire there was no opposition to our landing – & we suffered no Casualties.’ Afterwards, they headed south to assist the troops at ‘W Beach’, where they were met with heavily fortified defences, machine-gun fire, and enemy shells raining down. 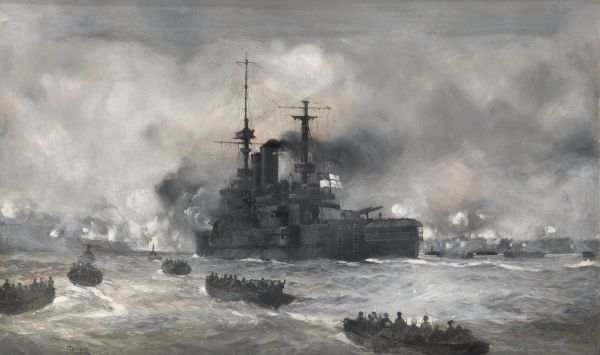 A moment from this historic event is depicted in a painting (RFM.926) by the renowned British marine painter Montague Dawson (1889/98-1973), on display in the museum galleries. Painted shortly after the campaign ended with the help of a ‘Sketch by an Eye Witness’, it features a string of small boats carrying the Royal Fusiliers in tow of the Implacable, viewed from the stern, on their approach towards ‘X Beach’. One wonders if the unnamed eyewitness may have been one of the Royal Fusiliers who landed on the beach and courageously fought ‘for Queen and Country’.

This painting would have played an important role in the dissemination of images during the war. Although photography had advanced sufficiently for cameras to be small enough to carry into action, war photographs lacked individuality due to their documentary nature. On the other hand, sketches and paintings by official and amateur war artists were better suited for illustrating personal experiences of warfare in a variety of artistic styles, including caricatures. This allowed for greater freedom and flexibility to convey emotional sentiments which would appeal to the public at home. 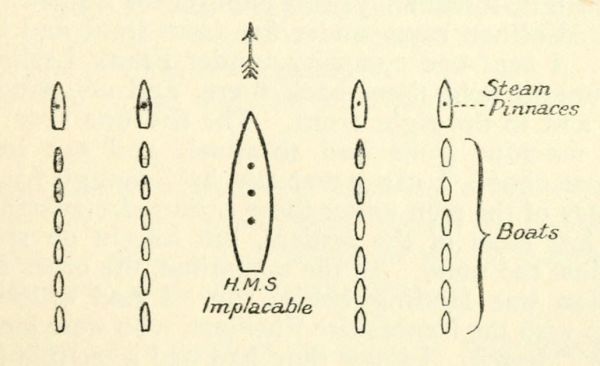 From paint to print

During the First World War, whilst enlisted in the Royal Navy, Montague Dawson was a regular contributor to a weekly illustrated publication called The Sphere, formed in 1900 as a response to the public appetite for images of conflict at the time of the Boer War. Because the present painting of the Implacable was painted in a monochrome style, it can be safely assumed that it was made specifically for publication in The Sphere; this was indeed the case.

Since early illustrated newspapers and magazines did not fully incorporate coloured images as standard until the 1970s, artists did not need to paint in colour for publication purposes. Monochrome pictures were not only quicker to paint, but they also allowed for better contrast and clarity of details. This played to Dawson’s strengths who, being a great admirer of 17th-century Dutch painting, sought to pursue technical accuracy and truthful representations of his subjects. Our painting accurately records Implacable’s appearance during the Gallipolli campaign before her subsequent refits and changes after 1916. The formation in which they approached ‘X Beach’ is also accurately depicted, featuring two tows of six transport boats on each side of Implacable.

Fun fact: The published print of our painting in The Sphere was so well received that the officers of the Implacablecommissioned a second version from the artist to be presented to Captain Lockyer as a gift. That painting is now in the collection of the National Maritime Museum, Greenwich (BHC0659). 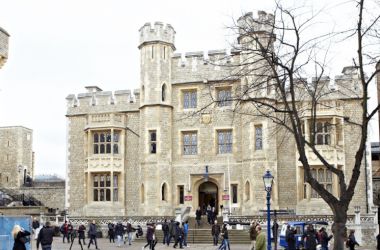