Early Life
William Thomas (or Wilbur Taylor) was born on the 6th May 1885 in Collingwood, Victoria, Australia to an English father Henry and an Australian mother Rose.

When the First World War broke out William organised local residents who offered themselves as volunteers to the British army. These were accepted and left for England where on the 12th February 1915 they joined the 25th (Frontiersmen) Battalion, Royal Fusiliers. At about this time William started to use the name of Wilbur Taylor Dartnell.

After only two months training the Battalion was sent on the 10th April 1915 to fight in the little known East African campaign arriving in Mombasa, Kenya on the 4th May 1915.

On the 22nd June 1915 the British army captured the German town of Bukoba on Lake Victoria. William entered the German Headquarters where he took down the Imperial Colours and raised the Union Flag (the former is now kept in the Headquarters of the Royal Regiment of Fusiliers in the Tower of London). For this action William was Mentioned in Dispatches and on the 25th July promoted to full Lieutenant.

On the 3rd September 1915 William was again in action at Maktau, Kenya where he won his VC. William was gazetted in the London Gazette on the 23rd December 1915 with the following citation:
"For most conspicuous bravery near Maktau (East Africa) on 3rd September, 1915. During a mounted infantry engagement the enemy got within a few yards of our men, and it was found impossible to get the more severely wounded away. Lieutenant Dartnell, who was himself being carried away wounded in the leg, seeing the situation and knowing that the enemy's black troops murdered the wounded, insisted on being left behind in the hopes of being able to save the lives of the other wounded men. He gave his own life in the gallant attempt to save others".

On returning to the scene later in the day the British found all of the wounded including William had been killed. 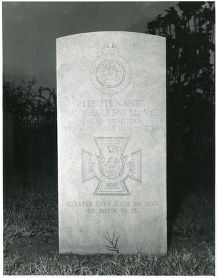 William is buried at the Commonwealth Graves Cemetery, Voi, Kenya.

On the 7th October 1916 William’s VC was presented to his widow Elizabeth Dartnell by Sir Donald Ferguson, Governor General of Australia. William Thomas Dartnell’s Victoria Cross and other medals are held at the Australian War Memorial in Canberra.