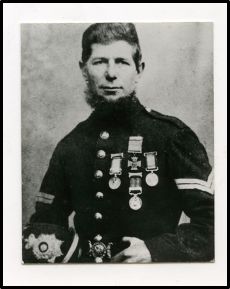 Early Life
William was born in Warrington, Lancashire in 1832.

Military Life
William enlisted in the 7th Regiment of Foot (later the Royal Fusiliers) on the 15th May 1854 aged 22. Previously he had served for a year in the 4th Royal Lancashire Militia.

He first saw action in the Crimean War and whilst on piquet (guard) duty outside of Sevastopol won the Victoria Cross. William was Gazetted on the 24th February 1857. The citation reads:
"On the night of 19th December 1854, Private Norman was placed on a single sentry some distance in front of the advanced sentries of an out-lying piquet in the White Horse Ravine, a post of much danger and requiring great vigilance. The Russian piquet was posted about 300 yards to his front, when three Russian soldiers advanced under cover of the brush-wood for the purpose of reconnoitring. Private William Norman single-handed took two of them prisoners without alarming the Russian piquet."

William Norman was invested with his Victoria Cross by Queen Victoria in Hyde Park on 26th June 1857.

He later served in the Umbeyla Campaign on the North-West Frontier and in 1863 achieved the rank of corporal before leaving the Army on 15th May 1865 following 10 years and 169 days of service.

Later Life
William and Elizabeth had three children; William, Charlotte and Sarah. He died on 13th March 1896 in Salford, Lancashire and was buried in a common grave at Weaste Cemetery, Salford, Lancashire. A headstone was financed and eventually erected over his grave on the 26th January 2004 after the Trustees of the Regiment found that none was in place.