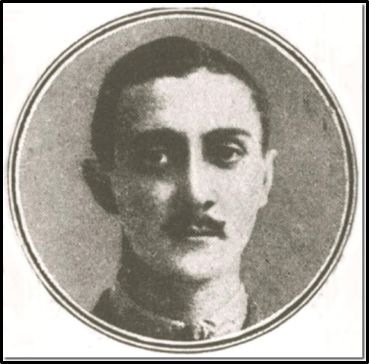 
Early Life
Walter Napleton Stone was born on 7th December 1891 to Edward and Emily Frances Stone in Blackheath, South London. His father was a solicitor and Walter was his tenth son. He was educated at Harrow School and Pembroke College, Cambridge but did not complete his studies as he left for Canada on the SS Lusitania on the 27th April 1912 to study Land Surveying. He met Maud Mabel Jukes and they had a son Reginald who was born on the 21st May 1914.

Military Life
Walter received a posthumous VC for his actions at Bourlon Wood during the Battle of Cambrai. He was gazetted in the London Gazette on the 12th February 1918. The citation reads:
“On 30th November, 1917, whilst in command of a company in an isolated position, 1000 yards to the front of the main line and overlooking the enemy in a position in the Cambrai sector, in France, he observed the enemy preparing for an attack and sent back information to headquarters to this effect. He was ordered to withdraw his company leaving a rearguard as cover. As the enemy attack gathered unexpected momentum, Captain Stone sent back three platoons, staying with the rearguard himself. Standing on the parapet with a telephone, all the time under heavy bombardment, he observed the enemy, sending back valuable information on the situation until the wire was cut on his orders. The rearguard was surrounded by the enemy and cut to pieces. Captain Stone was shot through the head as he fought to the last. The accuracy of the information he supplied was invaluable, causing the line to be saved, thus averting a disaster.”

At the time of his death Walter was 25 years of age. On the 2nd October 1918 Walter’s brother Lt. Col. Arthur Stone DSO of the 16th Lancashire Fusiliers was also killed in action. Walter’s body was never found and he is commemorated on the Cambrai Memorial to the Missing and at the family plot in Greenwich Cemetery.

The current whereabouts of his VC are unknown.