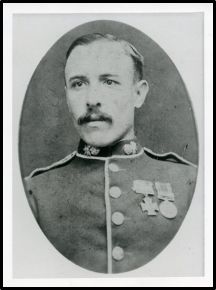 Early Life
Thomas was born in 1859 at 2 Peck’s Cottage, Newmarket, Cambridgeshire and was the illegitimate son of Thomas Ashford, a boot maker and Emma Elsdon. Thomas joined the Army at Woolwich on the 12th June 1877 aged 21, having previously worked as a Baker.

Military Life
Thomas served initially in the East Indies but by 1880 he was serving on the North West Frontier in the Second Afghan War. It was at Deh Khoja, near Kandahar, that Thomas assisted Lieutenant William St. Lucien-Chase of the 28th Bombay Native Infantry to rescued a wounded soldier. This action won him the Victoria Cross.

The citation reads:
"For conspicuous gallantry on the occasion of the sortie from Kandahar, on the 16th August, 1880, against the village of Deh Khoja, in having rescued and carried for a distance of over 200 yards, under the fire of the enemy, a wounded soldier, Private Massey, of the Royal Fusiliers, who had taken shelter in a blockhouse. Several times they were compelled to rest, but they persevered in bringing him to a place of safety". 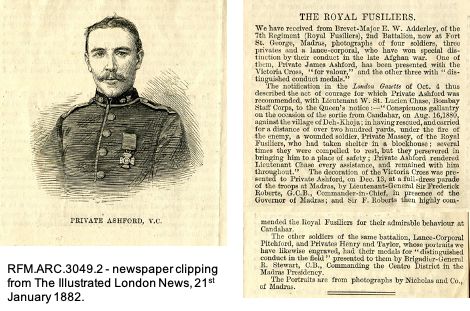 Later Life
After his military service Thomas settled in Thringstone, Leicestershire and served as a postman, indeed he is one of only two Postmen to ever win the VC.

He later moved to the nearby village of Whitwick and died of complications from bronchitis on 13th February 1913. He was buried in Whitwick Cemetery in an unmarked grave. In 1992 the local British Legion commissioned and erected a headstone in his memory. Three streets are now named in Whitwick his honour.