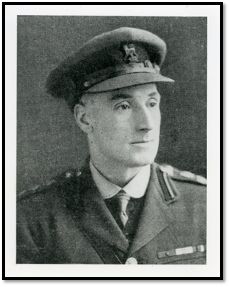 Early Life
Robert Gee was born at 29 Metcalf Street, Leicester on the 7th May 1876 to Robert, age 45 and Amy Gee age 48. At the time this area was by far the poorest part of the city. Both of Robert’s parents were employed as Framework Knitters in the local cloth industry. These jobs were extremely unhealthy and were probably a factor in the early death of both his parents. After their death, Robert age 11, was sent to the Leicester Union Workhouse and then to Countesthorp Cottage Homes (orphanages).

Military Life
On the 8th April 1893 Robert joined the 4th Queens Own Hussars. However on the 18th October he went Absent Without Leave and the next day under an assumed name (Sydney Evershed)  he enlisted with the 2nd Battalion Royal Fusiliers (City of London Regiment). He reverted to his real name later in the year after being tried for fraudulent enlistment. Despite this poor start Robert rose through the ranks rapidly, from Lance Corporal in 1896 to Warrant Officer by 1911. He was finally commissioned as a 2nd Lieutenant in 1915.

On the 5th September 1915 Robert joined the 2nd Battalion in Gallipoli. Within a few days he found himself an Acting Captain. Robert survived the flooding at Suvla Bay on the 26th November, which killed many men (both British and Turkish) who were drowned in their trenches or died of frostbite as the temperature dropped rapidly. On the 5th January 1916 the Battalion were withdrawn to Egypt.

Robert’s next significant action was on the Somme. On the 1st July 1916, the first day of the Battle of the Somme, the 2nd Battalion attacked Beaumont Hamel. Robert was severely wounded in the thigh and suffering from shell shock was evacuated to the UK. His actions during the attack had been noted and he was subsequently awarded the Military Cross. His citation for this award reads, "For conspicuous gallantry in action. He encouraged his men during the attack by fearlessly exposing himself and cheering them on. When wounded he refused to retire, and urged his men on till, after being blown in the air by a shell, he was carried in, half unconscious". Robert returned to France in February 1917 and was wounded again during August but returned to duty within a fortnight.

On the 30th November 1917 the 2nd Battalion saw action in the Battle of Cambrai. During a counter attacked by the enemy Robert was captured by two German soldiers, one of whom Robert killed, the other being shot by his Orderly. Following his escape Robert took control of the available soldiers and seeing that the enemy were setting up a machine gun attacked and captured this weapon, killing eight of the enemy.

For this action Robert received the Victoria Cross being gazetted on the 11th January 1918 with the following citation:
"For most Conspicuous bravery, initiative and determination when attacked by a strong enemy force pierced our line and captured a Brigade Headquarters and ammunition dump. Capt Gee finding himself a prisoner killed one of the enemy with his spiked stick and succeeded in escaping. He then organised a party of the Brigade Staff, with which he attacked the enemy fiercely, closely followed by two Companies of Infantry. By his own personal bravery and prompt action, he, aided by his orderlies, cleared the locality. Capt Gee established a defensive flank on the outskirts of the village, then finding that an enemy machine gun was still in action, with a revolver in each hand and followed by one man, he rushed and captured the gun killing eight of the crew. At this time he was wounded, but refused to have the wound dressed until he was satisfied that the defence was organised“.

It was only after the action that Robert allowed himself to be taken to an aid station to receive treatment for the gunshot wound. He returned to France during April 1918 but was evacuated home suffering from his previous injuries.

Later Life
On the 11th November 1920 Robert was one of 100 service men and the only Royal Fusilier chosen to form the Honour Guard at the internment of the Unknown Warrior at Westminster Abbey.

After unsuccessfully studying for The Bar, Robert decided to pursue a career in politics, initially standing on the 14th December 1918 for Consett, Co. Durham where he was narrowly defeated. On the 2nd March 1921 Robert became Unionist Member of Parliament for Woolwich East. Robert remained in politics until 1927 when he resigned his seat as M.P. for Bosworth, Leicestershire, although by this time he was living in Perth, Western Australia!

Despite visiting the UK he lived the rest of his life in Australia until his death on the 2nd August 1960 aged 84. 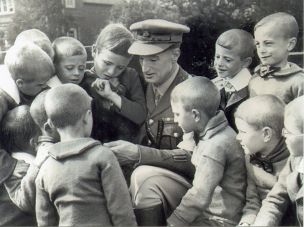 Left - 11th July 1918 at Countesthorp Cottage Homes, Leicestershire. Capt Robert Gee, VC, MC, visited the Cottage Homes on the occasion of the Annual Sports Day. All the young boys gathered to greet him and to have the opportunity to view his Victoria Cross.

As previously noted he had been admitted as an orphan to Cottage Homes on 5th August 1887 (aged 11 years) and remained there until the 8th March 1890.