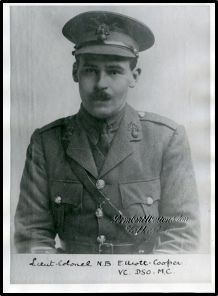 
Early Life
Neville Bowes Elliott-Cooper was born on 22nd January 1889 at Lancaster Gate, London, the youngest son of Sir Robert and Lady Elliott-Cooper, K.C.B. He was educated at Eton and the Royal Military College, Sandhurst.

Military Life
Neville was commissioned as Second Lieutenant in the 3rd Battalion Royal Fusiliers (City of London Regiment) on 9th October 1908 and served in South Africa, Mauritius and India.

After the outbreak of war he was attached to 8th Battalion of the Regiment which arrived in France on the 1st June 1915 and took part in the battles of Loos, the Somme and Arras.

Neville was 28 years old and serving as a Temporary Lieutenant Colonel commanding the 8th Battalion when he was awarded the Victoria Cross for his actions on 30 November 1917 east of La Macquarie, near Cambrai, France during the Battle of Cambrai. The citation reads:
"For most conspicuous bravery and devotion to duty. Hearing that the enemy had broken through our outpost line, he rushed out of his dug-out, and on seeing them advancing across the open he mounted the parapet and dashed forward calling upon the Reserve Company and details of the Battalion Headquarters to follow. Absolutely unarmed, he made straight for the advancing enemy, and under his direction our men forced them back 600 yards. While still some forty yards in front he was severely wounded. Realising that his men were greatly outnumbered and suffering heavy casualties, he signalled to them to withdraw, regardless of the fact that he himself must be taken prisoner. By his prompt and gallant leading he gained time for the reserves to move up and occupy the line of defence."

This was gazetted in the London Gazette on the 12th February 1918.

Neville was taken prisoner with a serious wound to the hip and sent to No.1 POW Camp, Lazarettenear Hanover. He was treated by the German doctors in attempts to save his life as attested to by Lt. Herbert Evans in letters now held by the museum that were sent by this officer to Lady Elliott-Cooper. His letter of the 5th February 1918 states that the Matron has suggested that his mother be made aware of the seriousness of his wounds. Neville has been operated on by Professor Schlange on the 28th December for a bullet that has entered the stomach and splintered against the hip bone. The pain was severe and they were unable to stop the internal bleeding and pus and that the wound was now septic. On the 20th February Lt. Evans confirmed that Neville died at 11.30 p.m. on the 11th February aged 29 and was buried on the 14th with full military honours and that a British soldier was allowed to take photographs of the ceremony, although these were not sent with the letter. Neville is buried at The Hamburg Military Cemetery, Germany.