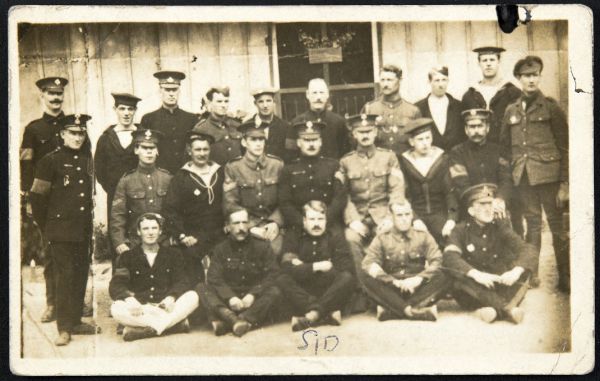 Early Life
Sidney Godly was born in East Grinstead, Sussex on the 14th August 1889. He was the son of Frank, a Journeyman Painter, and Avis Godly. After his Mother died in 1896 the family moved first to Willesden where Sidney attended Henry Street School and then to Sidcup, Kent where he attended Sidcup National School.

Sidney first worked in an ironmongery shop and later apprenticed as a plumber, before joining the Royal Fusiliers on the 13th December 1909 where an ‘e’ was incorrectly added to his surname by the Recruiting Sergeant.

Military Life
On the outbreak of the First World War the 4th Battalion Royal Fusiliers, were part of the 9th Brigade, 3rd Division, of the British Expeditionary Force, which arrived in Le Havre on the 13th August 1914.  On the 22nd August the Battalion reached the village of Nimy to the north of Mons, Belgium. ‘Y’ company were tasked with defending the Nimy railway crossing over the Mons-Conde canal. Here they were suddenly attacked at 8.00am on the 23rd in overwhelming numbers by the German army. ‘Y’ Company’s strength would have been approximately 120 men. The attacking German Battalion was in the order of 1,000.

Sidney’s job was to provide ammunition to the machine gunners but by about 1.00pm all of the gunners had been killed or wounded and there was nobody left to fire the guns. Asked if anyone knew how to fire the machine guns Sidney volunteered to stay behind and man the surviving gun whilst the rest of the battalion retreated. He stayed in action for a further two hours despite receiving multiple injuries thus enabling the remainder of the Battalion to withdraw before being overwhelmed by superior forces.

For his heroic actions Sidney was recommended for the Victoria Cross by Lt. Steele. The recommendation reads, “In the defence of the railway bridge at Nimy 23rd August 1914. This afternoon Pte. Godley showed particular heroism in his management of the machine guns, Lt. Dease having been severely wounded and each gunner shot in turn. Under extremely heavy fire he had to remove three bodies to get to the gun”.

Sidney was awarded the Victoria Cross which was written up in The London Gazette on the 24th November 1914, the brief citation reads, ‘’For coolness and gallantry in firing his machine-gun under a hot fire for two hours, after he had been wounded at Mons on the 23rd August’’.

Sidney was the first private soldier to win the VC in World War One. 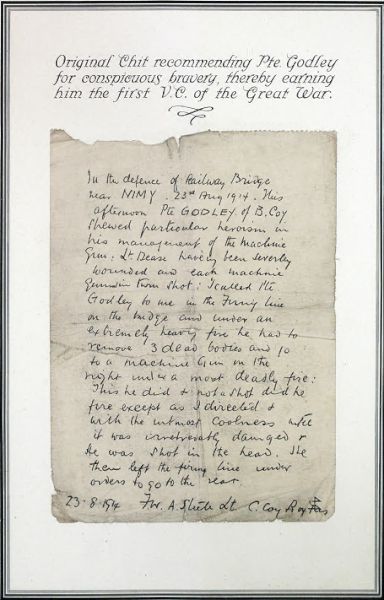 "In the defence of the Railway Bridge near Nimy, 23rd August 1914. This afternoon Pte Godley of B. Coy shewed particular heroism in his management of the machine gun. Lt. Dease having been severely wounded and each machine gunner shot in turn, I called Pte Godley to me in the firing line on the bridge and under extremely heavy fire he had to remove three dead bodies and [get] to a machine gun on the right under a most deadly fire. This he did and not a shot did he fire except as directed and with the utmost coolness until it was irretrievably damaged and he was shot in the head. He then left the firing line under orders to go to the rear".

Sidney who was badly wounded, was taken prisoner and remained a prisoner of war for the rest of the War. He carried bullet fragments in his head for the rest of his life. Whilst in a prison camp near Doberitz, Germany in the Spring of 1915 it was announced at a special parade that he had won the VC. As well the congratulations from his fellow prisoners Sidney was held in high esteem by the German officers who arranged a special dinner in his honour.

During Sidney’s time in prison his brother, Sgt. Percival Godly serving in the 32nd Battalion, Royal Fusiliers was killed in action on the 4th October 1916 following the battle of Flers le Courcelette (part of the Battle of the Somme).

Later Life
Sidney remained a prisoner until the German guards deserted near the end of the war. Sidney walked out of the camp and made his way to neutral Denmark a distance of 250 miles (420 kilometre) and then onwards to England. 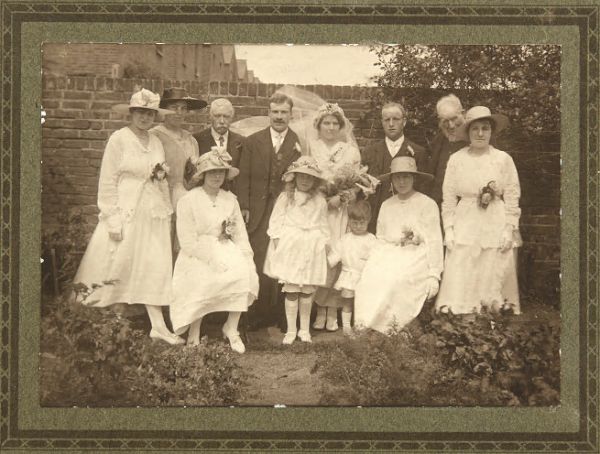 On the 2nd August 1919 he married Ellen Norman at St. Marks, Harlesden, Middlesex. He was married by the Reverend Noel Mellish, also a Royal Fusilier VC winner.  Noel’s medals are displayed in the Museum and Godley’s are held by a private collector. 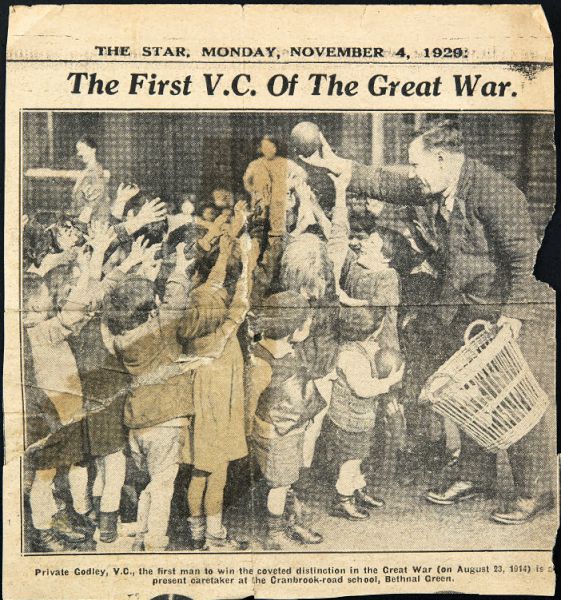 Returning to civilian life he again took up the trade of a plumber before becoming a school janitor for 30 years at Cranbrook School, Tower Hamlets, London. He died on the 29th June 1957 and is buried at Loughton Cemetery, Essex. One of the attendee’s at his funeral was the Rev. Noel Mellish VC.

RFM.ARC.2787 - as a caretaker at Cranbrook Road School, Bethnal Green.