Early Life
Maurice Dease was born on the 28th September 1889 in Gaulstown, County Westmeath, Ireland, the son of Edmund and Katherine Dease. He had a younger sister Maud. The family tree can be traced back to St. Thomas Moore, Lord Chancellor to Henry Vlll, who was executed for his catholic beliefs in 1535. Maurice was educated at Stonyhurst College before joining the army and training at the Royal Military Academy, Sandhurst.

Military Life
Maurice was commissioned into the 4th Battalion, Royal Fusiliers (City of London Regiment) on the 25th May 1910.

Prior to the start of the First World War Maurice was one of the officers responsible for the machine gun platoon where he had, serving under him, Private Sidney Frank Godley. The Battalion were amongst the first to set off for France landing in Le Havre on the 14th August 1914 and gradually moving with the British Expeditionary Force (BEF) through France and into Belgium.

On the 23rd August the BEF came into contact with the German army for the first time at the Battle of Mons. On this day only a single company of the 4th Battalion, including the machine gun section commanded by Maurice Dease, were defending the railway bridge that crossed the Mons-Conde canal at Nimy. Not realising how close the Germans were, the British Army commander had decided not to demolish any of the bridges over the canal so that they would be able to advance over the coming days. They were surprised when they were attacked in overwhelming numbers on the 23rd August.

An account of the action that followed is given by H. C. O'Neill in ‘The Royal Fusiliers in the Great War’:
“The machine gun crews were constantly being knocked out. So cramped was their position that when a man was hit he had to be removed before another could take his place. The approach from the trench was across the open, and whenever a gun stopped Lieutenant Maurice Dease went up to see what was wrong. To do this once called for no ordinary courage. To repeat it several times could only be done with real heroism. Dease was badly wounded on these journeys, but insisted on remaining at duty as long as one of his crew could fire. The third wound proved fatal, and a well-deserved VC was awarded him posthumously. By this time both guns had ceased firing, and all the crew had been knocked out. In response to an inquiry whether anyone else knew how to operate the guns Private Godley came forward. He cleared the emplacement under heavy fire and brought the gun into action. But he had not been firing long before the gun was hit and put completely out of action. The water jackets of both guns were riddled with bullets, so that they were no longer of any use. Godley himself was badly wounded and later fell into the hands of the Germans (see Godley's VC story to learn what happened to him).

Maurice Dease became one of the first British officer casualties of the First World War and the first posthumous recipient of the VC. His bravery was recorded on the 16th November 1914 in The London Gazette. The original citation is held at the museum and reads: 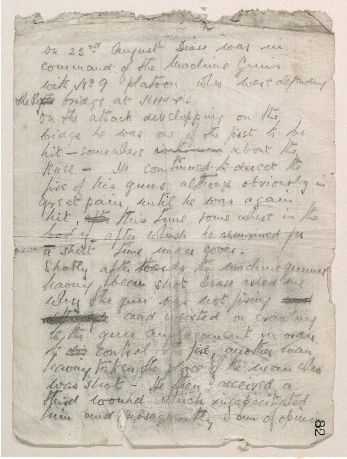 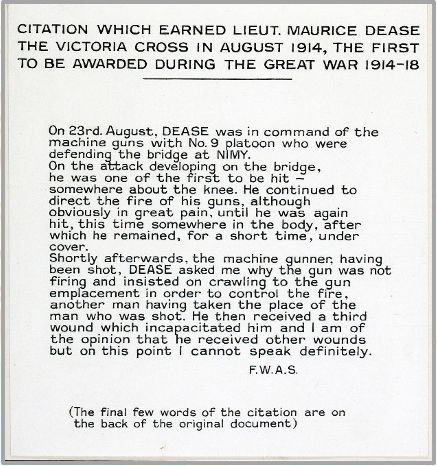 RFM.5 - Citation of Lt Dease.
Maurice’s body was recovered and he is now buried at St. Symphorium Military Cemetery near Mons, Belgium. He is also remembered in Westminster Cathedral and on a plaque installed in St Martin's Church, Culmullen, County Meath, Ireland.
Article written by research volunteer Paul.