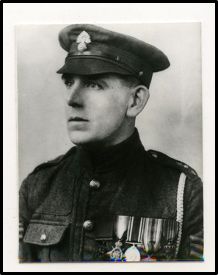 
Early Life
John was born in St.Helen’s, Lancashire on the 22nd November 1890 to Minnie Jane and Joseph Molyneux. Joseph Molyneux worked as a hewer in the local coal mine at Sherdley Colliery. John was one of five siblings.

John (although better known to family and friends as Jack) was educated at Holy Cross School until the age of 12 when he left to work in the local coal mine. By the 1911 Census he was working below ground as a Coal Drawer. By this time he had also learnt to play the concertina which he played throughout his life.

Military Life
John enlisted with the 2nd Battalion (City of London) Regiment, Royal Fusiliers on the 7th September 1914 at the age of 24. He was 6ft 5ins, at that time extremely tall. After training John joined the 2nd Battalion in Gallipoli at Cape Helles on the 20th August 1915. The Battalion had originally landed here at ‘X’ Beach on the 25th April, the first day of the disastrous Gallipoli campaign. John received minor wounds and frost bite in the storm at Cape Helles on the night of 25 - 26th November 1915 after which he was hospitalised in Malta.

The Battalion then moved to France landing on the 22nd March 1916. They took part in many of the major campaigns such as the Somme, the Third Battle of Ypres and the final advances of 1918.

John was wounded again during November 1916 but returned to the battalion in time for the Battle of Poelcappelle (part of the 3rd Battle of Ypres) and whilst in action at Langemarck, won the Victoria Cross. His citation reads:
“On 9 October 1917 east of Langemarck, Belgium, during an attack which was held up by machine-gun fire and causing many casualties, Sergeant Molyneux organised a bombing party to clear the trench in front of a house. Many of the enemy were killed and a machine-gun captured. The sergeant then called for someone to follow him and rushed for the house. By the time the extra men arrived he was in the thick of a hand-to-hand fight which only lasted a short time and the enemy surrendered. In addition to the dead and wounded between 20 or 30 prisoners were taken.’’

This award was gazetted in the London Gazette on the 26th November 1917 and the Victoria Cross was presented to John by King George V on the 12th December 1917. In February 1918 John also received the Belgium Croix de Guerre for bravery which was no doubt awarded for his actions at Langemarck.

John returned to active service until the end of the war and was demobilised during 1919.

Later Life
John married Mary after the war and returned to the coal mines until 1925 when he joined Pilkington Brothers, the glass manufacturer and the largest employer in St. Helen’s.

At the start of World War 2 John joined the Pilkington Brothers Home Guard unit as their Sergeant Major.

He remained in the St. Helen’s area until his death on the 25th March 1972 when his ashes were scattered in the Garden of Remembrance at St. Helen’s Cemetery.