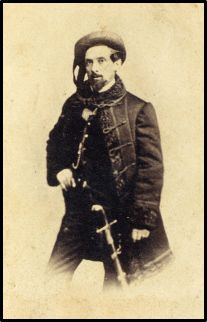 Early Life
Henry Jones the son of Robert and Charlotte was born in Dublin on the 11th February 1831.

Their first action was at the Battle of the Alma on the 20th September 1854 where Henry carried the Regimental Colours along with Lt. Coney. During this action Henry was badly wounded receiving a number of gunshot wounds. Thirty years later when receiving dental treatment a bullet was found still lodged in his jaw.

On the 7th June 1855 during the Siege of Sevastopol Henry won the Victoria Cross. The citation reads:
“For having distinguished himself, while serving with the party which stormed and took the Quarries, before Sebastopol, by repeatedly leading on his men to repel the continual assaults of the enemy during the night. Although wounded early in the evening, Captain Jones remained unflinchingly at his post until after daylight the following morning.”

However the award was not gazetted until September 1857 by which time Henry had resigned his position with the rank of Captain.

The delay in receiving confirmation of the VC may have led to his early resignation. There seems to be evidence that Henry actually applied to the War Office himself for the VC threatening to resign if it were not awarded. Although not common practice it is known that a small number of Officers did indeed apply for this distinguished award during the Crimean War and the Indian Mutiny.

Henry re-joined the Army in late 1861 but resigned his commission within two years to join the Diplomatic service.

Later Life
From 1863 until his retirement in 1898 Henry served as Consul General in various parts of the world, including as far a field as Fiji and closer to home in Norway. Henry died in Eastbourne, Sussex on the 11th December 1916, aged 85 years.

One year later on the 4th October 1917 his only son Oliver was killed in action whilst serving with the 9th Battalion Nottingham and Derbyshire Regiment (The Sherwood Foresters).