Early Life
George was born in Kennington, Surrey in 1891 the son of Frances and Levi Garratt a General Shopkeeper. George had four siblings and in 1911 was employed as a Junior Clerk with the famous Beefeater Gin Company. His mother is not recorded on the Census at this time.

In June 1915 George married Gertrude Elkins and during June 1916 she gave birth to a daughter Joyce.

Military Life
It has not been possible to trace George’s enlistment record but we know he initially served with the 12th Battalion Queens Own (Royal West Kent Regiment) before transferring to the Royal Fusiliers. We know little of George’s time in the Fusiliers as his Service Record no longer exists.

He arrived in France on the 21st March 1917. On the 3rd May, aged 25, he died saving the lives of wounded comrades after they were put into a dugout for their safety by German soldiers during the 2nd Battle of Arras.

The citation describing his actions was published in the London Gazette on the 8th June 1917 and reads:"
For most conspicuous bravery and devotion in deliberately sacrificing his life to save others. He had, together with some wounded men, been taken prisoner and placed under guard in a dug-out. The same evening the enemy were driven back by our troops, the leading infantrymen of which commenced to bomb the dug-outs. A grenade fell in the dugout, and without hesitation Cpl. Jarratt placed both feet on the grenade, the subsequent explosion blowing off both his legs. The wounded were later safely removed to our lines, but Cpl. Jarratt died before he could be removed. By this supreme act of self-sacrifice the lives of these wounded were saved."

George has no known grave and is commemorated on the Arras Memorial, France.

On the 21st July 1917 King George VI presented George’s Victoria Cross to Gertrude and Joyce Jarratt in a ceremony at Hyde Park. Gertrude later remarried at Kilburn, Middlesex in November 1921. 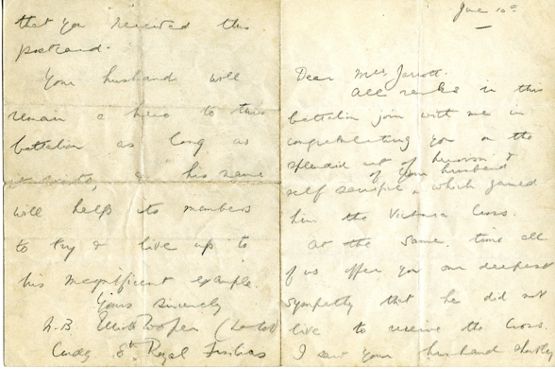