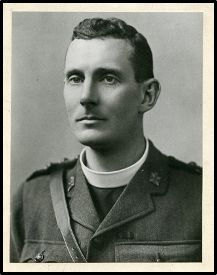 Early Life
Noel Mellish was born in Barnet, Hertfordshire on the 24th December 1880 to Edward and Mary Mellish.

Military Life
Noel joined the 6th Volunteer Battalion, The Artists Rifles before volunteering to serve in the Boer War in South Africa between 1900 and 1902 as a Trooper in Baden Powell’s Police force.

On one occasion whilst in South Africa Noel’s unit found themselves surrounded. Managing to escape Noel returned with a relieving party to rescue his comrades. After the war he returned to South Africa and spent some time there before returning to England and training to become a priest. He was ordained in 1912 at the age of 32, serving at St. Paul’s Church, Deptford, South London.

In May 1915 he once again volunteered to join the army. This time he served in the Army Chaplains Department and was attached to the 4th Battalion Royal Fusiliers. Whilst serving near Zillebeke, south of Ypres, the Battalion took part in the Battle of the St. Eloi Craters. They suffered many casualties.

On the nights of the 27th - 29th March 1916 Noel continually ventured into no-mans land rescuing wounded soldiers lying between the lines. These acts of bravery won him the VC. He was gazetted on the 20th April 1916.

The citation reads:
“For most conspicuous bravery. During heavy fighting on three consecutive days, he repeatedly went backwards and forwards under continuous and heavy shell and machine-gun fire between our original trenches and those captured from the enemy, in order to tend and rescue wounded men. He brought in ten badly wounded men on the first day on ground swept by machine-gun fire and three were killed while he was dressing their wounds. The battalion to which he was attached was relieved on the second day but he went back and brought in twelve more wounded men.  On the night of the third day he took charge of a party of volunteers and once more returned to the trenches to rescue the remaining wounded. This splendid work was quite voluntary on his part and outside the scope of ordinary duties.”

Noel was the first Padre to win a VC during the First World War.

On the 25th September 1915 Noel’s brother, 2nd Lieutenant Richard Mellish, was killed whilst serving with the 1st Middlesex Regiment at the Battle of Loos.

During late 1918 Noel was also awarded the Military Cross before eventually leaving the Army in 1919. 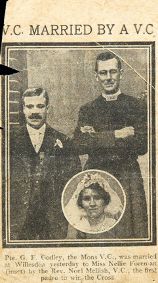 Later Life
In 1919 Noel became Parish Priest at St. Mark’s, Lewisham, South London until 1925 when he moved to Great Dunmow, Essex. In 1947 he moved to Baltonsborough, Somerset where he remained until his retirement in 1953. He married Elizabeth Wallace Molesworth on the 3rd December 1919. Two of his sons went on to serve with the Royal Fusiliers in the Second World War. On 2nd August 1919 Reverend Mellish officiated at the marriage of another Royal Fusilier VC winner, Private Sidney Frank Godley, also of the 4th Battalion Royal Fusiliers. Noel was later to attend Sidney Godley’s funeral in 1957. During the Second World War Noel became an Air Raid Warden. Noel died on the 8th July 1962 at South Petherton, Somerset.