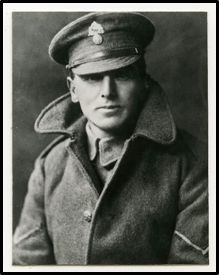 
Early Life
Charles was born in High Bentham, Yorkshire and was bought up by his mother’s sister Catherine and her husband, James. Not long after Charles’s birth they moved to Dorking, Surrey to enable James to take a job as a gardener on a local estate. Charles was educated at Dorking High School.

Military Life
Charles volunteered as a Trooper in the Middlesex Imperial Yeomanry and fought in the Boer War receiving the Queens South Africa Medal. After returning to Great Britain and resuming work as a Ticket Booking Clerk with the London Northern and Eastern Railway, Charles came to see this war as ’Dishonourable’. He appears to have sold this medal and it ended up in a private collection being reunited with the rest of Charles’s medals when it was bought by the museum in 1996.

Charles went on to enlist with the 10th (known unofficially as the Stockbrokers) Battalion of the Royal Fusiliers. In November 1915 he joined the rest of the Battalion who had been in France since the 30th July 1915.

It is likely that Charles saw action during the Battle of the Somme where the Battalion were engaged.

He was wounded in April 1917 at the Battle of Arras.

On the 1st September 1917 Charles won the Military Medal at Estaminet Corner near Wytschaete, (known to the British Tommy as ‘White Sheets’)  during the 3rd Battle of Ypres.

On the 8 - 9th of August 1918, whilst fighting at Polderhoek Chateau on the Menin Road outside Ypres, Charles won the Victoria Cross.

The Citation read as follows:
‘’For conspicuous bravery in repelling a strong attack by the enemy on the 8th/9th March, 1918 near Polderhoek Chateau, Belgium. Realising that they were cut off, Lance-Corporal Robertson sent two men to get reinforcements, whilst remaining at his post, along with one other man, firing his Lewis gun and killing large numbers of the enemy. No reinforcements came. Realising that he was completely cut off, he withdrew, with the only other survivor, took a place 10 yards to the rear. Here he successfully defended his position, staying for some time, firing his gun and inflicting casualties on the enemy. He was forced to withdraw again when the position came under heavy hostile bombing and machine-gun fire. Arriving at a defended post, he and a comrade mounted a machine gun in a shell-hole. From this position they kept up a continuous fire at the enemy who were now pouring into an adjacent trench. They had not been firing long when his comrade was killed. Lance-Corporal Robertson was also wounded. In this condition he crawled back with his machine gun, being unable to fire it as he had exhausted all of the ammunition’’. 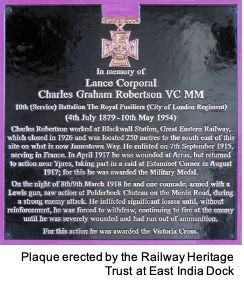 Later Life
After the war Charles returned to his job with the LNE Railway.  Apart from a gold watch presented by the people of Dorking, Charles refused any financial rewards insisting that any money raised should go to local charities instead.

During 1939 at the age of 60 Charles married Doreen Gascoigne and later that year joined the Home Guard as a Sergeant.

In September 2015 the Railway Heritage Trust erected a plaque to commemorate Charles near to the East India Dock DLR station at Blackwall Way, London, recognising his achievements both as a Railwayman and a VC winner.