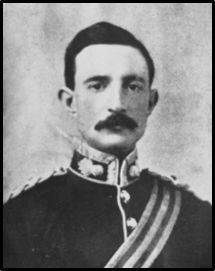 Early Life
Charles FitzClarence was born on the 8th May 1865 in County Kildare, the Son of Captain the Honourable George FitzClarence, of the Royal Navy. He was educated at Eton and Wellington College before joining the Royal Fusiliers on the 10th November 1886.

Charles had a twin brother Edward who was killed in action at Abu Hamed, Egypt in 1897.

Military Life
Owing to illness much of Charles’s earlier service was in administration work in the UK. To see front line service Charles went to South Africa during the Boer War and volunteered as a Special Services Officer in the Protectorate Regiment.

Charles’s VC was given for three separate acts of bravery during the 2nd Boer War and was gazetted in the Edinburgh Gazette on the 6th July 1900:
‘’On the 14th October, 1899, Captain FitzCIarence went with his squadron of the Protectorate Regiment, consisting of only partially trained men, who had never been in action, to the assistance of an armoured train which had gone out from Mafeking. The enemy were in greatly superior numbers, and the squadron was for a time surrounded, and it looked as if nothing could save them from being shot down. Captain FitzCIarence, however, by his personal coolness and courage inspired the greatest confidence in his men, and, by his bold and efficient handling of them, not only succeeded in relieving the armoured train, but inflicted a heavy defeat on the Boers, who lost 50 killed and a large number wounded, his own losses being 2 killed and 15 wounded. The moral effect of this blow had a very important bearing on subsequent encounters with the Boers.’’