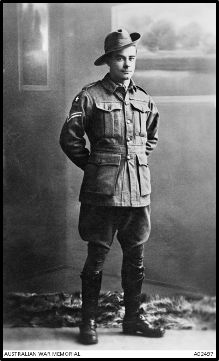 Early Life
Arthur Sullivan was born on the 27th November 1896 in Prospect, Adelaide, South Australia the son of Arthur and Eliza Sullivan. In 1913 Arthur joined the National Bank of Australia where he remained until joining the Australian Army on the 27th April 1918.

Military Life
Upon joining the Army he was posted as a reinforcement to the 10th Battalion Australian Imperial Force but in October he was sent instead as a reinforcement to the Australian Artillery. Although he was sent to the UK he saw no action during the First World War and was discharged from the Australian Army in the UK on the 12th June 1919. However before his official discharge he joined the 45th Battalion Royal Fusiliers on the 23rd May 1919 and left with them for Russia in early June 1919 to take part in the North Russia Relief Force Campaign.

It was in an action on the Sheika River near Dvina that Arthur won the VC. The citation reads:
‘’For most conspicuous bravery and devotion to duty on the 10th August 1919, at the Sheika River, North Russia. The platoon to which he belonged, after fighting a rearguard covering action, had to cross the river by means of a narrow plank and during the passage an officer and three men fell into a deep swamp. Without hesitation, under intense fire, Corporal Sullivan jumped into the river and rescued all four, bringing them out singly. But for this gallant action his comrades would undoubtedly have been drowned. It was a splendid example of heroism, as all ranks were on the point of exhaustion, and the enemy less than 100 yards distant.’’

The award was gazetted in the London Gazette 26th September 1919.

The 45th Battalion left Russia in October 1919 and Arthur returned to the UK. Although a date had been arranged for the presentation of the VC by King George V Arthur was keen to return to Australia and did not wait for the presentation. He eventually received his VC from The Prince of Wales in Australia in April 1920. 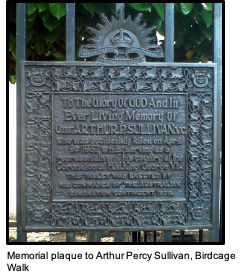 Later Life
Upon returning to Australia Arthur resumed his job with the bank and married Dorothy Veal on the 5th December 1928. They had three children.

He joined the Australian contingent who returned to the UK in 1937 for the coronation of King George VI. Unfortunately on the 9th April 1937 Arthur died when he accidentally slipped and struck his head against the kerb in Birdcage Walk near Wellington Barracks, London. There is a memorial plaque to Arthur in Birdcage Walk. Following his cremation his ashes were returned to the family in Australia.

His Victoria Cross and Military Medal are on display at the Australian War Memorial in Canberra.